How much fitment.. ? TS 11th prc 2018, Go will be released soon : Chief Minister K. Chandrasekhar Rao said recently that the Interim Relief (IR) will be announced On June 2, and PRC will be implemented from August 15 after discussions with the Employees’ unions. Now this issue has enabled millions of employees and pensioners to discussing as Employee Salary modification to what extent ? How much percentage of fitment will be given? . The Pay Revision Commission @PRC will report in three months to state Government. According to the tenth PRC, the Govt has issued 43% fitment for employees since 2014. It is currently in use. This time 63 percent of fitment is being demanded by the unions. 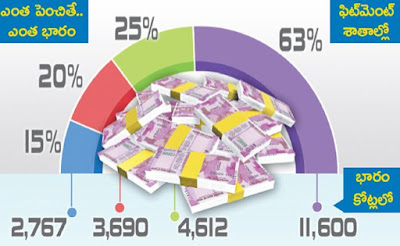 Would you have a huge salary change on existing wages? The Finance Department is already calculated on how much of the treasury is affected by the increase. Prior to discussions with Employee Unions, The Finance Department submitted a report to the CM. In this context, the Government has directed the TS 11th PRC 2018 to take into consideration the financial position of the state while recommending fitment.

Officials say that giving more than 20%  fitment will affect economic management. The Finance Ministry has already prepared a number of calculations. 15 per cent increase to Rs 2,767 crore per annum, 20 per cent increase by Rs 3,690 crore and 25 per cent to Rs 4,612 crore is expected that the treasury will be burdened.

According to estimates, the government is likely to be given between 20% and 30% fitment.

The relevant order (TS Fitment Go ) will be issued after the Pay Revision Commission report was examined by the government.