RPS 2018 TS : Telangana first PRC commission was formed : You can get the details of TS PRC 2018, 11th prc commission latest news, rps 2018 in telangana, 11th prc in telangana and other relevant information here. The Telangana First Pay Revision Commission (PRC) was formed. The government has issued orders for appointing three members in the Commission. In this commission, Bishwal was appointed as chairman and retired IAS C. Umamaheswara Rao and Dr. Mohammed Ali Rafat as members. They will be studying the salaries of employees. The report will be submitted within three months from the date of commissioning of the commission. 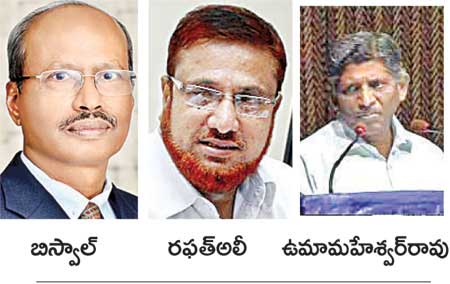 Chief KCR assured that the Pay Revision Commission will be set up immediately after discussions with the Employee Unions on the 16th May 2018.  The PRC will submit its report to the government in three months. Increased wages will be set up to apply for the state formation day from June 2. The benefits of PRC will be paid by July 2018 month salary.

10th PRC is still in force in the joint state. The latest PRC is eleventh. However, it was the first PRC after the state’s formation. So it was the first PRC in Telangana. Accordingly, the state government employees have to be remunerated from July 1 this year. General Secretary Sri SK Joshi issued the order on 18th May for appointing PRC. Commission set up Pay Scales and studying the Service Rules as the department wise. The current DA (Dearness allowance ) should be merged into wages and will also consider how to adjust the revised wages as per the merged DA.

The government has asked the Commission to follow the automatic advancement schemes and give instructions on what to do if the changes are to be made. The Pay Revision Commission will make reference to Special Allowances, Special Pay, Pay Scales, Damage Allowances, Rent Free for Government Quarters, HRA etc.

Chaitranjan Biswal, a retired IAS officer of the joint Andhra Pradesh cadre, is very experienced. He has a deep understanding of employees’ problems. He started his job as a Sub collector on Parvatipuram. Subsequently, it was the ITDA Project Officer, Mahbubnagar District Collector. Bishwal, who served as secretary and chief secretary of various departments, was appointed as the CCLA in 2009. After the retirement, he worked as chairman of APPSC. The 67-year-old bishop has an enormous experience of many things.